You should know before traveling to Israel

Planning a visit to the world’s cradle of religion? Want to know a little more about cultural etiquette and how to dress? Here you’ll find loads of handy travel info from health precautions to the local food, souvenirs to look out for and what currency you’ll need. 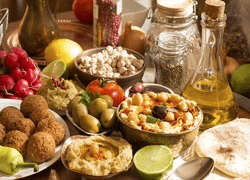 Food in Israel is extremely diverse and generally very good. A well known favourite is falafel – small fried balls of mashed chickpeas, usually served inside unleavened pita bread with houmous (a cream of chickpeas, tehina, onion, lemon and olive oil). Another popular dish is Shawarma, sliced turkey meat which is also served in pita bread. Also try Me’orav Yerushalmi (Jerusalemite mix) which contain several types of meat, or Schnitzel. Fresh fruit and salads are very popular in Israeli cuisine and a Fatoush salad is a must try – chopped onions, cucumbers and herbs are mixed together and topped with fried bread and sometimes feta or grilled halloumi cheese.

Kosher food means anything that is allowed by the Jewish religious laws concerning food. In short, pork and shellfish are forbidden and meat and dairy products must not be cooked together or eaten at the same meal. Most of the hotels in Israel are Kosher (including those we use on our group tours), so breakfast is dairy, and during lunch and dinner it is not possible to have milk in tea or coffee. In religious cities like Jerusalem many cafes and restaurants are Kosher.

Alcohol is available at many hotels and restaurants (excluding the Palestinian territories). Maccabee and Gold star (costing approx USD$5 a bottle) are both palatable pale lagers and certified kosher. Israeli wine is produced by hundreds of wineries, ranging in size from boutique enterprises to large companies producing over ten million bottles per year. The modern Israeli wine industry was founded by Baron Edmond James de Rothschild, owner of the Bordeaux estate Château Laffite-Rothschild. Much of the country is suited for viticulture, prices are a little high though still a top drop can be enjoyed with every meal.

Is it safe to drink tap water in Israel?

The tap water in Israel is generally considered safe to drink, but as a precaution against stomach upsets you may want to drink bottled water, which is readily available from shops, hotels and restaurants.

Is it standard to tip in Israel?

In restaurants, it is standard practice to tip between 10-15% with 12% the normal amount. Tips are usually left in cash rather than on card, so it is useful to carry some small change with you. Other people in the service industry, like taxi drivers, will not expect to be tipped but certainly will not turn away a few spare coins.

What is the currency in Israel?

The currency of Israel is the Israeli New Shekel. Pound Sterling, US Dollars, Euro and other major currencies can be exchanged in Israel. ATMs and exchange facilities are available everywhere. It’s advisable to request bank notes in smaller denominations, as it can sometimes be hard to get change from large notes and smaller notes are handy for smaller purchases and gratuities. Traveller’s Cheques are not recommended as they’re often difficult to exchange and incur high fees. A passport is required when exchanging travellers’ cheques.

What do things cost in Israel?

Generally speaking, Israeli prices are not hugely different to what we are used to in the UK or USA. Hotels are particularly expensive because hotel owners are saddled with all sorts of costs that are unique to Israel. This has made Tel Aviv among the most expensive cities in the world for accommodation, ahead of Tokyo and New York. Food is much cheaper, however, with a decent meal costing between USD $5-10 depending on how hungry you are. Taxis within Tel Aviv usually won’t come to more than about USD $8.

What vaccinations do I need for Israel?

You should seek medical advice from your local health practitioner before travelling to Israel and ensure that you receive all of the appropriate vaccinations. As a guide Tetanus and Hepatitis A are strongly recommended. For more information on health precautions for Israel, check out the NHS Fit to Travel page or the CDC Traveler’s Health page.

What sort of plugs do I need for Israel and what is the voltage?

Standard voltage is 220 volts, 50Hz AC. Primary sockets require the Continental or European two small round pin variety. We recommend that you pack a universal travel adaptor. You will need a voltage converter and plug adaptor in order to use U.S. appliances.

Is WiFi widely available in Israel?

WiFi is widely available throughout the country and is usually offered free of charge in most restaurants, cafes and bars as well as some hotels. Other hotels may charge for WiFi usage.

What time zone is Israel on?

Israel is 2 hours ahead of Greenwich Meantime (GMT). Daylight Saving time starts on the Friday before the 02 April. The move back to standard time occurs late September/early October according to the Jewish calendar falling on a Saturday night between Rosh Hashanah (Jewish New Year) and Yom Kippur. During this period, Israel is 3 hours ahead of GMT. 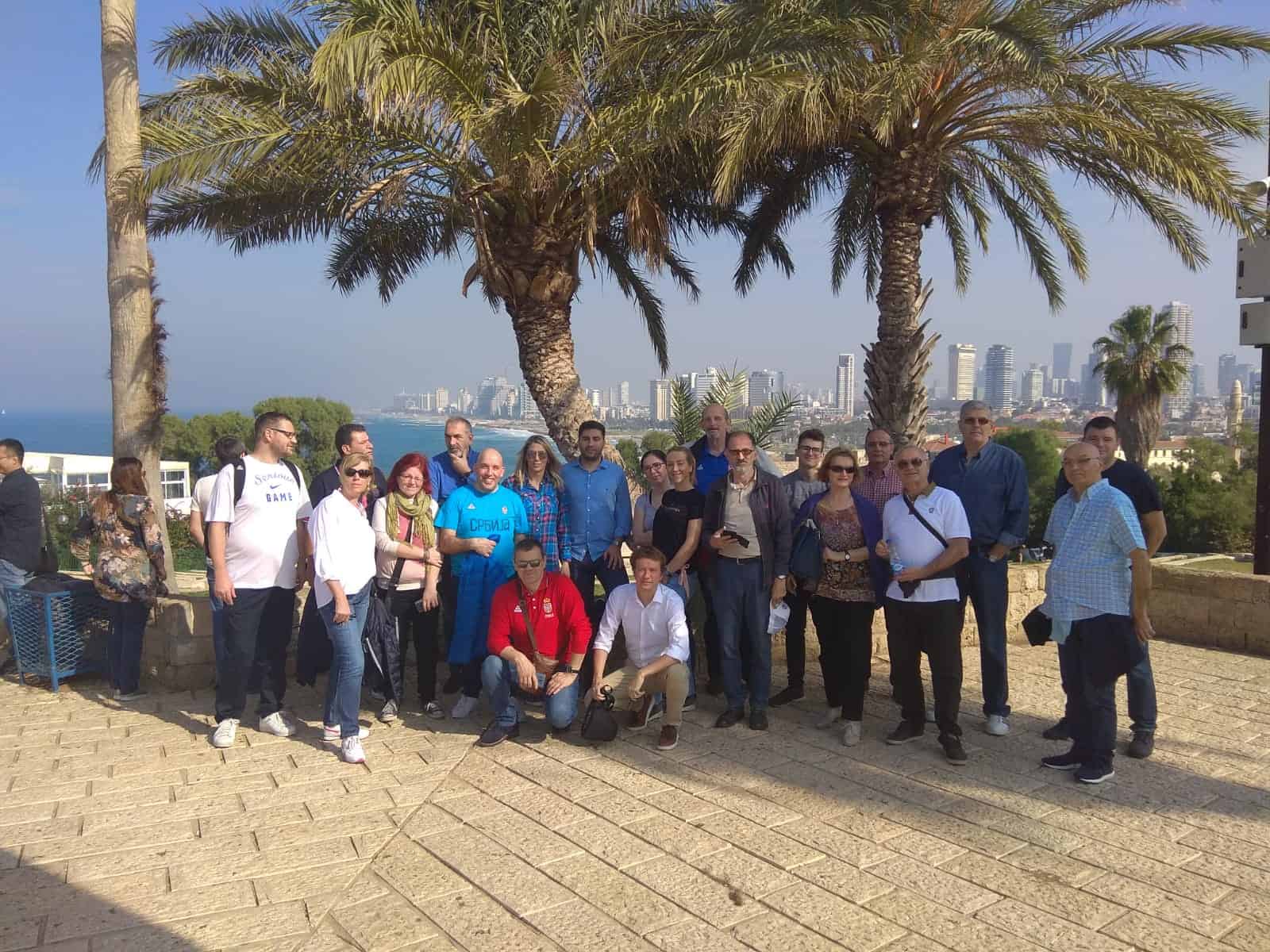 Despite the inevitable ups and downs of travelling abroad, you will generally be shown great hospitality in Israel. Israel is generally a very relaxed country with a western-oriented outlook. Respect for religion is important to most Israeli’s and there are a few situations when this should be kept in mind.

Visitors to some synagogues, most churches and all mosques should be aware that entry will normally not be permitted to those with exposed legs or women with exposed upper arms. Women may be asked to cover bare arms and legs in both mosques and synagogues. Carry a wrap or bring along long sleeve shirts for these occasions. Further, men should cover their heads when entering a synagogue with a hemispherical shaped skullcap called a kippah or yarmulke (often provided by the synagogue) though a normal sunhat is also acceptable and in mosques both men and women will be required to take off their shoes before entry.

Israeli people are generally quite direct in what they have to say. Openness and honesty are often valued over politeness and projection of niceness. Direct personal questions are common and should not be taken as offensive. Israelis are also very kind and hospitable. When you make a friend here, they will do their best to take care of you while you’re in their country. Foreign visitors are deeply appreciated and are generally shown the utmost respect by locals.

While Israel is for the most part safe to visit, it is no secret that conflict can arise and escalate quickly. Be sure to stay updated before and during your trip. Areas of issue are usually on borders and the Gaza strip is to be avoided. However don’t be afraid to visit Palestinian territories, as this offers a great insight into history as well, with towns/cities such as Jericho and Bethlehem not to be missed.

Hebrew & Arabic are the official languages of Israel and the Palestinian territories, however English is widely spoken.

Every Friday as the sun sets, the Jewish Sabbath begins and most of Israel shuts down until the following evening. There will be no public transportation, most stores and restaurants close, and the roads will be noticeably calmer. Bare this in mind before making travel arrangements in Israel as you don’t want to find yourself stranded somewhere!

However, the extent to which Shabbat is observed depends on where you are in Israel: in West Jerusalem pretty much everything will be closed, but in Tel Aviv a significant number of bars, restaurants, and stores remain open and the city stays very much alive!

Seasons and Weather  – What to Pack 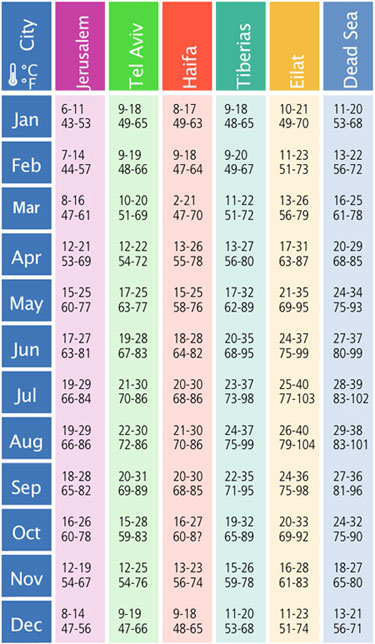 The winter months of November to March are the coldest in Israel with snow in the northern reaches of the Golan Heights, and occasional snow fall in Jerusalem. The coast experiences the heaviest rainfall at this time though temperatures in places like Eilat are reasonably pleasant still.

Jerusalem and other highland areas are splendid in the summer (June – August) when temperatures are high with balmy evenings, and little chance of rain. Tel Aviv and the far south of the country are usually several degrees warmer, making it the perfect place to soak up the sun beach side. If you plan on visiting the Dead Sea or Negev Desert be sure to pack a hat to protect you from the sun.

The seasons of spring (April and May) and autumn (September and October) are the best time to visit Israel when temperatures are pleasantly mild throughout the country. During these spring and autumn months pack clothes that you can wear in layers, so that whether sunny skies or cool weather you will always be prepared.

Ask our experts, and we will be happy to help you!